Down The Rabbit Hole at LA’s Weirdest, Wildest Bar

An Alice in Wonderland-themed Valley destination draws a massive crowd

The San Fernando Valley is full of finds, from burger spots you’ve always seen but never stopped at to neon warehouses toppling over with signs from days gone by. It’s a massive part of greater Los Angeles, and constantly offers charming wonders you may have never known existed. Case in point: The Rabbit Hole Bar, a not-quite-underground but very much in-the-know drink spothidden in a stony strip mall in West Hills. It might seem like the place is just another deep Valley dive bar, but stepping inside is like, well, going through the looking glass.

Emerge on the other side (after weaving through a small but very real interior hedge maze) and be rewarded with one of the quirkiest, coolest, and most flat-out fun bars anywhere in Los Angeles. As the name predicts, The Rabbit Hole is almost entirely Alice in Wonderland-themed, from the hand-carved wooden seats to the funhouse mirrors to the oddball images on loop inside all the hanging televisions.

Some other quirks of the place (including opening instructions for the bathroom door that are exactly wrong, or the upside down sign out front) are simply meant to be pleasantly confusing, while the bar’s website is a bit more on the Matrix side of the equation. It all adds up to one funky drink stop for a random night out in the Valley.

The all-female bartender crew joyfully gets in on the Alice act themselves, dressing up nightly as, say, the Mad Hatter, or a coquettish Tweedledee and Tweedledum duo. The drinks they make bear the neon glow and flashy appeal of some Lewis Carroll novelty — and they take a few minutes to make each, though that doesn’t seem to stifle the weekend crowds any. In fact, on Friday and Saturday nights, the line often pulls around and down the corner, with fans lining up just to get a drink, or to show off their own oddball outfits with friends. A taco truck outside keeps the crowd revived.

The Rabbit Hole Bar is primarily the brainchild of Alexander Maximillian, who opened the place in early 2013. He’s got a long streak for pop culture love and has done his best to turn this low, narrow space into something special. He partnered with Glenn Carter to make individual stools, and is in production now on a Disney-sized spinning teacup to put inside the bar at some point. He’s even talked about branching out into other thematic bar treasures eventually, but unlike the short-lived stints of places like Ron Burgundy-themed Stay Classy Bar, Maximillian builds places that last, that locals want to drink in.

And drink they do. The Rabbit Hole is something of a Valley favorite for those in the know, and business is good. Maybe it’s not about the outfits or the glowing drinks or the faux-bloody bathroom or Alice at all, but just about providing for a deep West Valley neighborhood that often doesn’t get a lot for the rest of Los Angeles to be jealous of. But The Rabbit Hole Bar is certainly swoon-worthy for anyone interested in the oddities of LA — and a must for anyone with an Alice in Wonderland streak of their own. 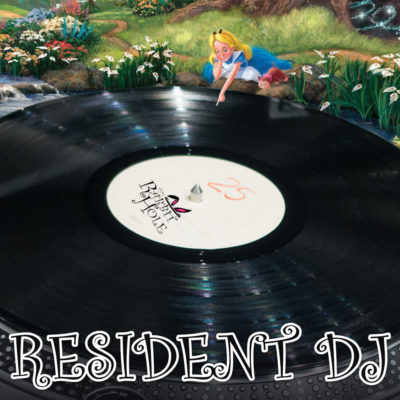